Creek Fire: Socked in smoke halts much of the air attack Sunday, Monday 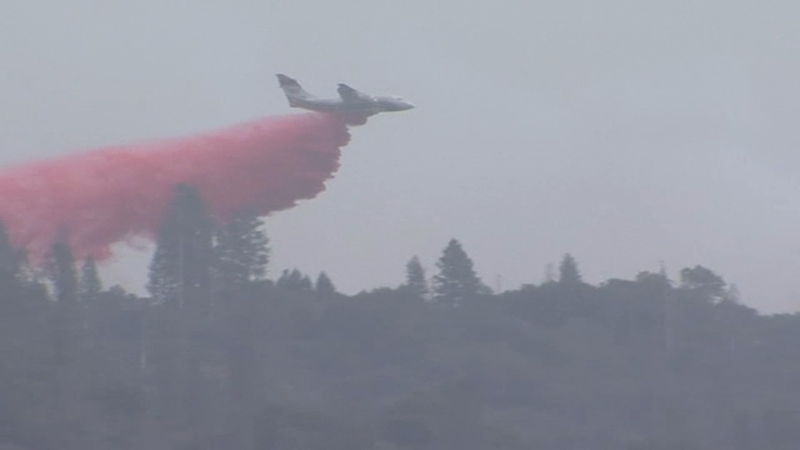 Creek Fire: Socked in smoke halts much of the air attack Sunday, Monday

FRESNO, Calif. (KFSN) -- Low visibility has grounded much of the air attack for the Creek Fire on Monday, but a few tankers were still able to get out to the SQF Complex Fire.

Late on Monday as conditions allowed, some helicopters were allowed to drop a bucket of water on the flames, but the smoke that's socked into the Central Valley halted any air tankers from making it to the front lines.

Monday afternoon, the only plane getting a quick gas up and retardant fill wasn't headed to the Creek Fire.

"Our aircraft drop at over 130 miles an hour and if you can't see more than like we are a quarter to half mile up there, it's just not safe," said CalFire Captain, Jordan Motta.

Helicopters and air tankers were halted Friday and Saturday from the Creek Fire air attack in Fresno and Madera Counties, but Sunday, they were able to drop 24 loads of retardant when air quality improved slightly in the afternoon.

Conditions are monitored by meteorologists constantly.

"We're just kind of in a wait and hold pattern. The aircraft are ready, they are loaded, the aircraft and crews are here. They have thousands of gallons of retardant ready to go. That's what they've been using this downtime for is prepping all of that," said Captain Motta.

When firefighters started getting some containment of the fire last week- ground crews worked in tandem with a full force air attack to slow the forward progress.

Firefighters were able to drop five times more retardant last Wednesday than they were able to during Sunday's ash filled skies. Helicopters also pitched in with countless water drops.

So as mother nature halted much of the air attack Monday- firefighters looked to other ways to make progress. Crews are arriving from across the country to put out the fire.

"There's a lot of moving parts. We just crossed 25 hundred personnel on the fire, that's a lot of personnel to manage," said Motta.

Fire crews say if there's any benefit to the smoky conditions-it's that the fire isn't as intense on the front line. But another wind event could cause a whole new dynamic.

Monday afternoon at the attack base you could hardly see the tower, visibility is about a half of a mile- even less at the Creek Fire. It must be at least a mile to safely drop retardant and water on the flames.