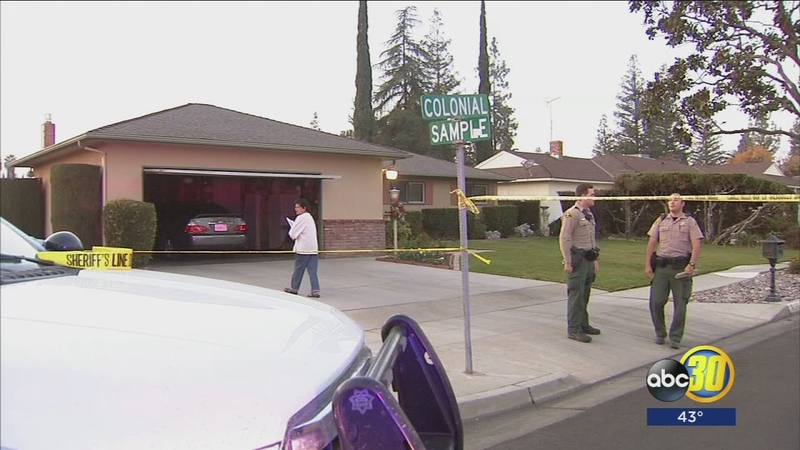 FRESNO, Calif. (KFSN) -- The sheriff's office is still calling this a pair of suspicious deaths. They say a deputy found the bodies and immediately noticed something was a little off.

A maze of crime scene tape caught neighbors off guard in this Northwest Fresno neighborhood. Many know of the family that lived inside this home including Karl Wyneken. Nervous to hear what transpired inside.

"I was shocked, I couldn't figure out what was going on," neighbor Karl Wyneken said.

All investigators will reveal is that two bodies were found Monday afternoon. Someone requested for deputies to make a welfare check at the house because one of the victims failed to show up for an appointment.

Tony Botti of the Fresno County Sheriff's Office said, "It just sounded like it was unusual for this person to not show up to an appointment so that rose to the level of concern for this person who thought she'd get us involved."

Deputies will not reveal the identity, ages, or even genders of the victims. Only that their deaths are considered suspicious.

Neighbors told us the family who lived inside had been there for decades.

"She's an elderly person, her husband died a number of years ago," said Wyneken.

Deputies spent Monday afternoon going door to door while also calling up relatives. They say their priority is figuring out if the victims had any problems or recent disputes with others.

"It's so early into it that we have to contact family and friends to get their side of the story to get a better story of what may have led to this," Botti said.
Report a correction or typo
Related topics:
fresno countysuspicious deathbody found
Copyright © 2021 KFSN-TV. All Rights Reserved.
SUSPICIOUS DEATH
FBI, Vegas police offer $10K for information about slain boy
Porterville police investigating suspicious death of 46-year-old man
21-year-old man found dead in Visalia home
Deputies identify man found dead in Fresno Co. orchard
TOP STORIES
What to expect from CA's reopening today
Newsom picks 10 winners of $15M to celebrate reopening
UC will require students, faculty and staff to be vaccinated
Where you'll still have to wear a mask after CA reopens today
Central CA businesses hope for revival as state reopens today
Historic heat wave could cancel some Valley events
Newsom says vaccinated CA workers won't have to wear masks after June 17
Show More
Fresno Diocese says churches may fully reopen this weekend
Man crashes into police car on Tule Reservation, deputies say
US COVID death toll hits 600K, equal to yearly cancer toll
Fresno Chaffee Zoo reopens all exhibits
Suspect in custody after standoff in Kings County
More TOP STORIES News