Dylan Noble's mother files lawsuit against the City of Fresno 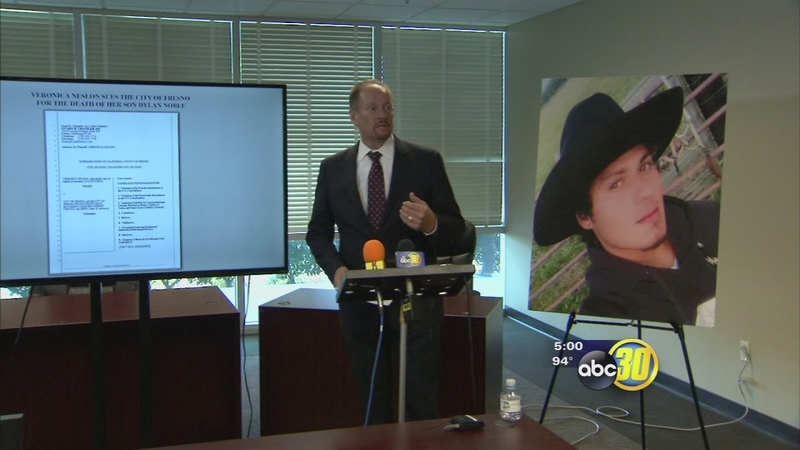 "There's been almost no discussion about what the officers had available to them at that time other than just pointing their guns and even a shotgun from shooting and killing this young man who was innocent and unarmed," said Stuart Chandler, the attorney for Noble's mother

Chandler said officers had several options to take down Dylan --- without killing him.

Based on the body camera video Chief Jerry Dyer released, there's been a lot of public debate over whether Dylan Noble gave officers enough reasons to shoot him and whether all four shots were justified. Now, a new animation, prepared by Chandler in preparation for the lawsuit, makes the case that officers never should have fired. Calling the shooting of Noble completely unjustified, Chandler said excessive force is just built into the culture of the Fresno Police Department.

"It's really the culmination of a series of problems in the police department with regard to training, policies and practices," Chandler said.

Body camera video showed Noble ignoring commands from officers and seeming to pretend as if he had a weapon before an officer shot him twice. Seconds later, with Noble on the ground, the same officer fired again. And a while after that, a second officer fired a fourth shot. But chandler created another possible scenario out of the same video and audio -- one in which officers used a canine unit.

"He's getting out of the car," you hear officers shouting in actual audio from the body camera video. "Get down on the ground."

"Let the dog go," says an officer a short time later, while Dylan Noble was walking away from the officers.

The animation separates from reality there. The officer releases the dog and it takes just a couple seconds for the dog to detain Dylan. Officers then move in on him with their guns still drawn.

"This could've very easily been done," Chandler said. "There was no need to shoot and kill Dylan noble. Not one of those shots was necessary or appropriate."

"Animation is created in a sterile environment, inside a computer lab, with the benefit of 20/20 hindsight, and the absence of stress," he said.

Dyer said Fresno police officers get some of the best training and in this case, they thought Noble might be an armed man recently reported to 911. ABC30 legal analyst Tony Capozzi says the animation ultimately may not change the critical facts.

Dyer said the department's investigation should wrap up this month.
After that, the Fresno County district attorney's office tells us they hope to finish off their investigation within 60 days.

Dylan Noble's father is also expected to file a lawsuit, but it could be years before a case goes to trial.