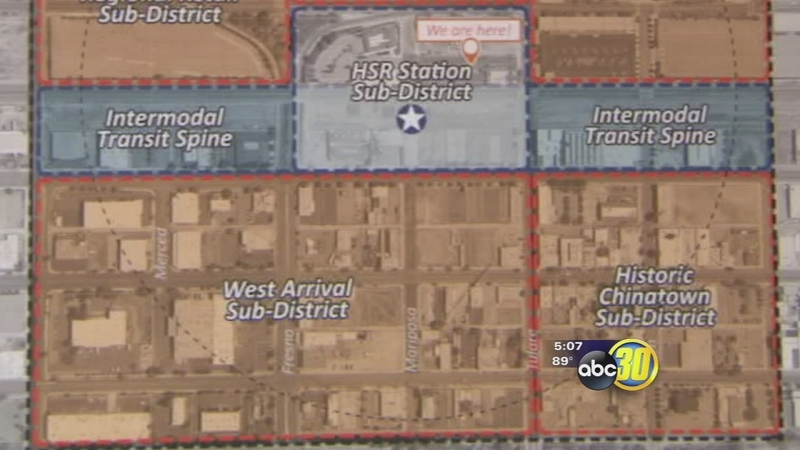 FRESNO, Calif. (KFSN) -- With the opening of the Downtown High Speed Rail Station just seven years away, city leaders hope to make the most of the major change.

Renatta Carter-Ford supports the controversial project, and is curious how the city's proposed Fresno Station District will impact Chinatown, where she leases land to four businesses, including a tire shop. "And I wanted to come and check it out, find out what's happening with it."

After months of feedback from community members, businesses owners, and civic leaders the City of Fresno now has two fairly similar scenarios that they hope will make downtown a destination location after the station becomes operational in 2022.

The hope is that once high speed rail passengers exit on Mariposa Street, they'll want to walk along the Mariposa Corridor to the Fulton Mall, or beyond.

In both scenarios, the city would reconnect streets on the city grid. The main difference between scenarios relates to how Chinatown will change: either more small scale retail and residential space, or more office space. "We really want to provide some kind of amenity to Chinatown, in this case, it's a park," explained Emerson.

Carter-Ford will need some time to process the proposals. A consultant will refine the scenarios again, and the city will hear from the public next year. "I think it will be worth it, I think once everything is done, it's definitely going to be worth it for Fresno."
Related topics:
fresno downtownchinatownfresnofresno downtownhigh speed rail
Copyright © 2021 KFSN-TV. All Rights Reserved.
FRESNO
City of Fresno tentatively wins right to enter Tower Theatre
Affordable housing information offered in southwest Fresno
Nearly $50 million jury verdict for man injured by American Ambulance
Northwest Fresno house party ends with stabbing after TV damaged
TOP STORIES
Loved ones say goodbye to Fresno teen killed in alleged DUI crash
1 killed, 1 injured in Merced County crash, CHP says
Bulldogs win turnover battle, bounce back with 17-0 win at Wyoming
US religious group says 17 missionaries kidnapped in Haiti
Fresno leaders take part in 'Firefighter for a Day' event
Driver hospitalized with major injuries after fiery crash near Goshen
Merced police seize large stack of weapons, suspect on the run
Show More
2 hit by stray bullets during Visalia shooting
Public service to be held for fallen hero officer Malama Scanlan
Gunman shoots 3 Texas deputies from behind, killing one: police
Fresno Co. foster kids forced to sleep on desks, who knew and when?
Fresno police investigating deadly assault in early October
More TOP STORIES News