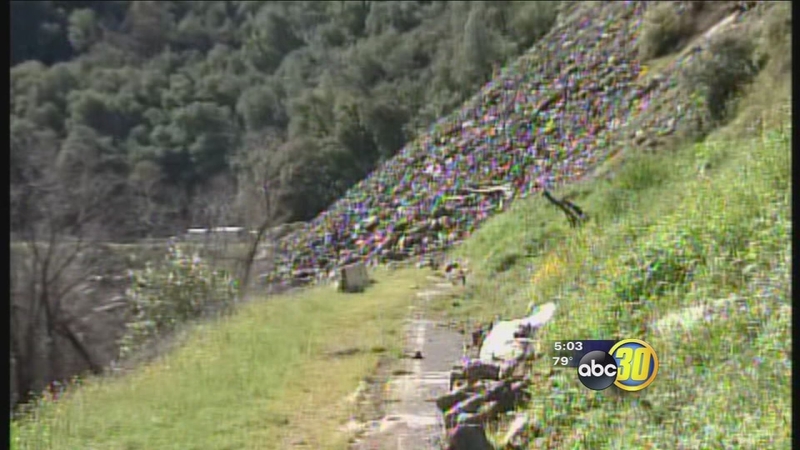 MARIPOSA, Calif. (KFSN) -- A big step toward easing traffic into Mariposa and Yosemite National Park was taken on Friday. Part of Highway 140 was covered by a rockslide eight years ago. Now, Caltrans is starting to restore the highway.

Reopening this section of Highway 140 is a big job. They have to remove thousands of tons of rock that covers the roadway, then build a tunnel or rock shed over the highway to keep future rockslides from covering the roads.

"It's a very unique project for California. I only know of this being the second rock shed in our state," said Caltrans Director Malcolm Dougherty.

Once the debris is cleared, work will begin on the 750-foot-long rock shed. It will restore the highway to two-lane traffic, and remove the delays and temporary bridges over the Merced River, making it easier for local residents and the millions of visitors to Yosemite National Park.

"It's the highway most people choose to come into Yosemite during the winter, so we're really excited that this project is getting started, and we are looking forward to the completion of it," said Yosemite National Park spokesperson Keri Cobb.

Members of the Miwok Indian Tribe joined local dignitaries in celebrating the start of the $133 million project.

"We have watched this project take shape over the last eight years. Actually, folks have really adjusted well to the one-lane bridges, and we're very excited to get this massive project underway," said Mariposa County Supervisor Kevin Cann.

This project is a big deal for Mariposa, the county and Yosemite National Park, but it's no quick fix. It's taken eight years to get this started, and completion is expected to take another five years.