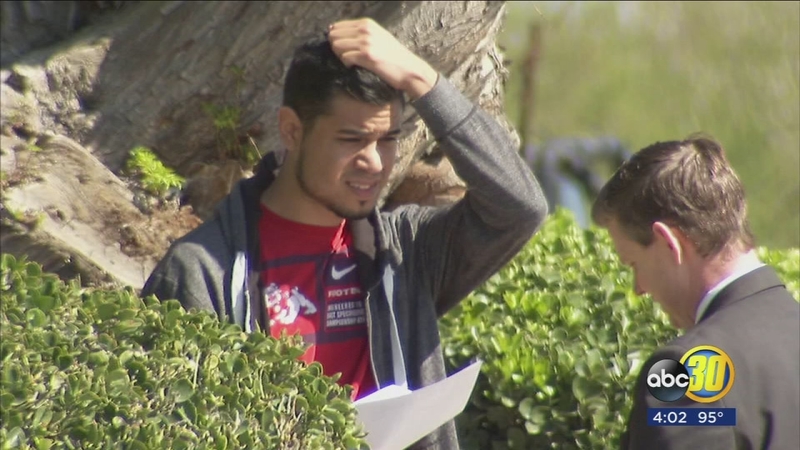 FRESNO, Calif. (KFSN) -- There will be no deal for a Fresno County man who's admitted to secretly recording women three times.

Action News first reported on David Chavez two years ago when he got rearrested just days after his first conviction. Chavez is now charged with doing it again just as he was about to get a relatively minor punishment.

Chavez knows he's made a lot of trouble for himself. He got probation after a conviction for secretly recording a customer at the Caruthers Quikstop in 2014.

Action News anchor Corin Hoggard tracked him down when, two days after he avoided jail for the crime, another customer said she caught him doing the same thing.

"And then you repeated it, though," an Action News reporter asked.

Since that day in March 2015, Chavez picked up a third peeping case. He was about to admit to those two cases and stay out of jail again. A judge ordered him to get a phone that wouldn't record any video or take pictures.

But just days before the cases got resolved, a teenager says he tried to record her trying on a sports bra at Plato's Closet. She told police she recognized him because she'd seen his photo on ABC30.

And she tells Action News when she tracked him down, Chavez tried to explain it away. But prosecutors filed a new case against him, and the judge was no longer willing to take it easy on Chavez.

"What I've indicated, because of the number of cases Mr. Chavez now has, is I would certainly consider lifetime 290 registration," Judge Ralph Nunez said in court.

That's sex offender registration, and legal analyst Robert Lamanuzzi says it's a possibility Chavez might have to take seriously now, even though the charge is a misdemeanor.

"On this peeping tom case, it's not mandatory, but the judge - if he finds the person has a sexual disorder or this was done for sexual gratification - he can order a person to register for life," Lamanuzzi said.

Lamanuzzi says Chavez could also face a year in jail on the new charge and a couple years altogether. Chavez could now go to trial as soon as next month in all three cases.
Report a correction or typo
Related topics:
carutherssex offenderpeeping tomcourt casefresno county
Copyright © 2021 KFSN-TV. All Rights Reserved.
FRESNO COUNTY