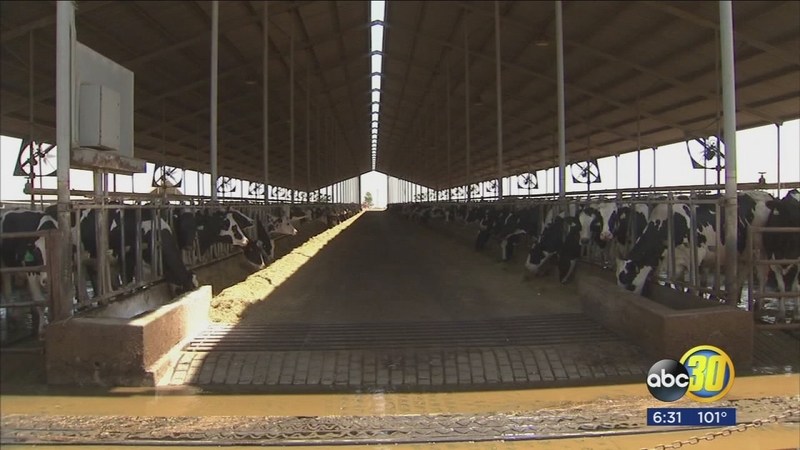 KERMAN, Calif. (KFSN) -- Despite efforts to keep cows cool during last month's Valley heat wave the dairy industry still suffered big losses. Close to 10,000 animals died during the hot spell. So many the Baker Commodities Rendering Plant in Kerman was overwhelmed. It could not take on any more cows due to the large number of carcasses and mechanical issues.

In a special meeting Fresno County Supervisors voted to extend a local emergency which was declared on June 30th. The decision allows dairy operators to compost or bury carcasses on the farm until Baker Commodities can catch up to the recent spike in cow deaths.

"As of last week they had actually stopped picking up the animals because they had nowhere to physically put them on their property," said Brian Pacheco, Supervisor.

Pacheco is a dairy owner-- he said the afternoon highs don't always pose the biggest problems to very young and very old cows.

"What happened during the heat wave is when the night-time temperatures didn't get below 80 degrees it causes severe hardship."

The Valley is in the middle of another heat wave, though Wright doesn't believe dairies will be hit as hard.

Wright said local dairies typically see a three-percent loss of animals each year due to the summer heat. But one woman at the special meeting felt the average number was too high.

"I think it's criminal that 7,500 is a typical loss and 10,000 is a little too much, and now we have to deal with how to deal the carcasses," said Debby Martsolf, Fresno.

Dairy cow deaths due to the high heat have been reported all around the state.

Baker Commodities is expected to resume full rendering operations on Friday and county officials hope to lift the emergency declaration at the next Board of Supervisors meeting-- that meeting is scheduled for next Tuesday.

The back-up at Baker Commodities is being felt valley-wide-- on Thursday Tulare County Supervisors declared an emergency due to heat-related livestock deaths.