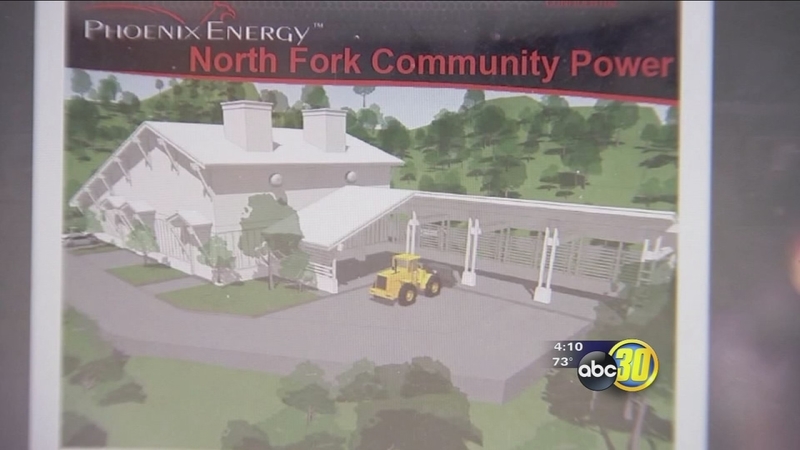 NORTH FORK, Calif. (KFSN) -- One tree after another, millions of them affected by the bark beetle. Causing the biggest rate of tree mortality the Sierra National Forest has ever seen.

"Now we're lucky to have five to seven live trees per acre because the beetles have taken over and it's just destroyed our forests-- it's unbelievable," said Tom Wheeler, Madera County Supervisor.

Now, a possible solution-- a power plant that would convert those dead trees into electricity.

North Fork Community Power and the Yosemite/Sequoia RC&D Council, along with other government leaders and project partners, held a groundbreaking ceremony for the bioenergy facility at the site of the old sawmill that closed down in the early 90's.

Dan Rosenburg with the North Fork Community Development Project said the plant is primarily funded through a $5-million grant from the California Commission. He said the power plant will help produce enough energy to power 1,000 homes by baking the wood from the dead trees and collecting the gas emissions that will be used to create the electricity.

"We're going to sell it back to the grid via PG&E, and the money generated with be an economic engine the community."

Supervisor Wheeler said this will be the biggest economic driver for North Fork since the old sawmill. the closer caused hundreds of jobs to be lost. He said this new plant will create about a dozen new jobs but also said he wants this power plant to cause an even bigger reaction.

"Now we can get some of these other businesses to come here and bring jobs here."

Project coordinators said they are ready to get the project going and take down the dead trees to bring new life to North Fork.