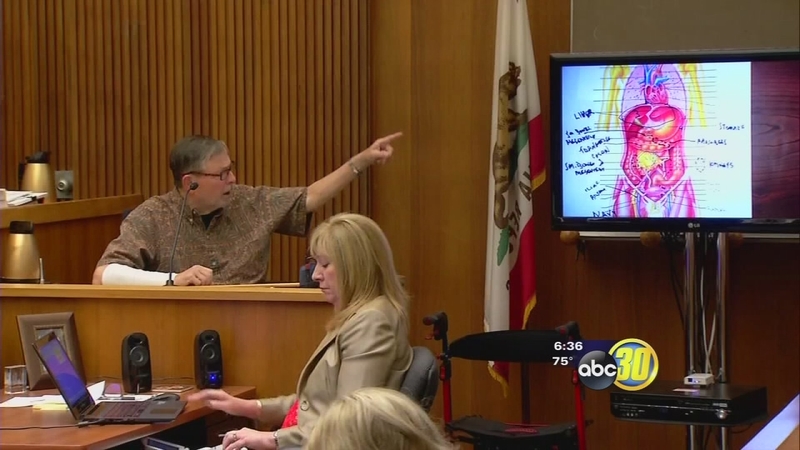 VISALIA, Calif. (KFSN) -- Aside from those directly involved in the case proceedings, there's one person to count on seeing at the Christopher Cheary murder trial: Sam Coronado, the great grandfather of Sophia Acosta.

Cheary is charged with raping and killing Acosta, his girlfriend's daughter, in May of 2011.

"I've coming every day since the first arraignment," Coronado said. "It's been five years, I'm still here, waiting for some justice."

Coronado is the grandfather of Obediah Acosta, the child's biological father.
He says his grandson, who has already testified in the trial, is still having a hard time with the case.

"It's all in his head, and it's bothering him a lot, and he don't want to be alone," Coronado said.

Dr. Burr Hartman conducted Sophia Acosta's autopsy on May 16th, 2011.
Thursday, he was asked about the graphic details of that examination, including the bleeding he saw in areas around the genitals. He also testified to the cause of Sophia's death. He said her brain died due to oxygen starvation and that her heart and lungs stopped.

"And then I said due to multiple blunt force trauma because there was evidence of multiple traumatic injuries at different places in the body," Dr. Hartman said.

Dr. Hartman said the child suffered a non-accidental traumatic event.
But he could not say exactly when that event happened nor could he conclusively determine if the child was sexually assaulted.

"As far as I know, this child was healthy and without unusual conditions before she died," Hartman said.

Cheary is charged with first-degree murder and special circumstances of torture and sexual abuse.

With hours of tough testimony ahead, Sam Coronado needs all the support he can get.