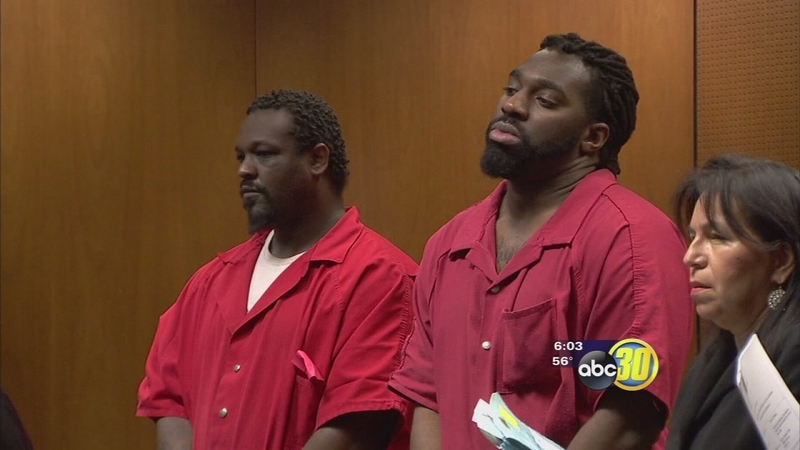 FRESNO, Calif. (KFSN) -- Christopher Roberts and Dwayne Dodson stood once again in their red jumpsuit's. This was their final appearance after years of hearings and a lengthy trial they have pleaded to voluntary manslaughter and other counts.

"Understanding all the facts of the case, understanding that we were facing another trial, it was better to settle," said Ralph Torres, Dodson's attorney.

"I don't believe that there ever would have been a conviction in this case had we gone forward to trial. But the stakes were too high for my client to take that chance," said Margarita Martinez-Baly, Robert's attorney.

Surveillance cameras were rolling at Super One Liquor in Southeast Fresno as two masked men rushed in. One of them put a gun to the clerk head and pulled the trigger-- Kashmir Manes was killed.

Throughout the past four years, the suspects have claimed they were the wrong guys. But Thursday, instead of enduring another grueling trial, prosecutors reached a deal with the defendants.

"It was a hard fought case and based on the status and evidence and some feedback from jurors, we entered into a plea agreement and I'm glad it brings a resolution to the case," said Sam Dalesandro, Deputy District Attorney.

The punishment ended a drawn out trial that exhausted everyone involved.

Both defense attorneys said their clients were anxious to move on and had difficult choices to make.

Roberts is just 25-years-old. Based on his time already served, the deal leaves him with only about two and a half more years in prison.

But Dodson, who is 39, will still spend about 10 more years locked up.

"We understood that if we lost, he would never get out. So, it's something that you take with a grain of salt but knowing that we saved his life," said Torres.