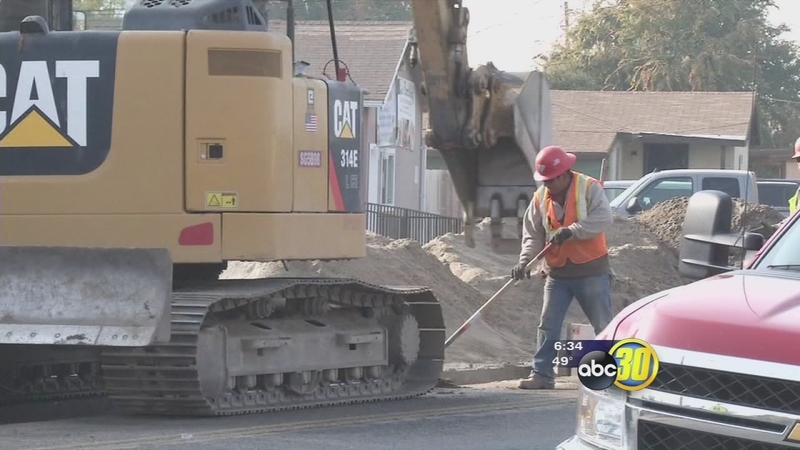 PORTERVILLE, Calif. (KFSN) -- A project that plans to bring a permanent water source to hundreds of East Porterville residents is well underway, but it still has a long way to go.

When she started seeing problems with her water, resident Emilia Cornejo would pay her neighbors $20 for some of their city water.

Cornejo's well isn't dry yet, so she uses it along with what's provided by the state: a large tank and bottled water for drinking. Recently, she signed up to be part of the multi-million dollar state project that plans to bring permanent relief to the East Porterville community, where hundreds of wells have gone dry during the drought, by eventually connecting 1,100 homes there to the Porterville city water system.

"And it's all being done within one year and that's pretty remarkable from a coordination standpoint," Porterville city manager John Lollis said.

The first home was connected in late August and Lollis says two to three homes are being hooked up every day and the first 70 are almost done.

"I would say there's probably at least 800 or 900 folks that have come forward," he said. "Some of them, the emergency connections, which is defining that 300 number, as well as those that may have water right now but would like to have a more sustainable option for the future. So, they are coming forward and signing up."

Six miles from East Porterville, a new well is being built to supplement supply for the first few hundred connections. But Lollis says the state doesn't want to wait until it's done to finish their first phase of the project. If it isn't completed by March 1, the city is considering a hold on moving forward with more connections.

Back in East Porterville, Cornejo doesn't borrow water from her neighbors anymore, but she's always wanted to be on the city system.