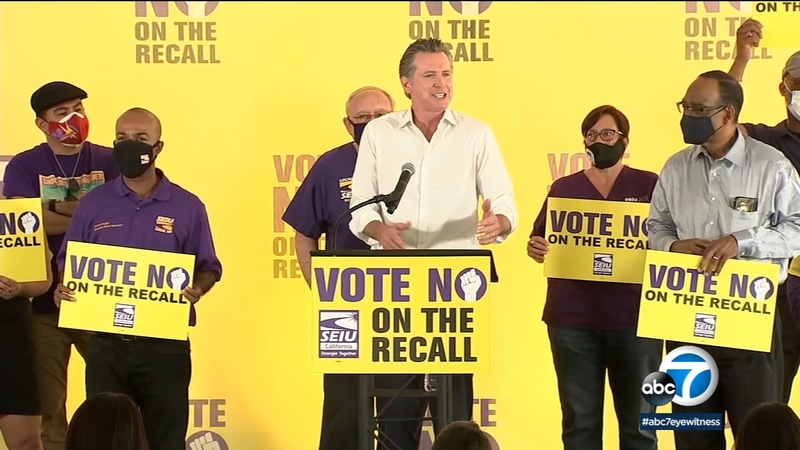 Newsom brings his 'Vote No' on recall campaign to LA area

COMMERCE, Calif. -- Gov. Gavin Newsom is on a mission this weekend to convince every California voter to vote "no" in the upcoming recall election, and on Saturday morning he held two campaign events in the Los Angeles area.

The governor's first stop was at Service Employees International Union headquarters in Commerce, where he delivered remarks to volunteers who are helping him in his effort to rally voters against the recall.

"This is the most consequential election you're going to have an opportunity to vote on," Newsom said during an impassioned speech. "I know it felt like that last year, as it relates to Trump, but we didn't defeat Trumpism -- it's still alive and well in the state of California. It's on the ballot Sept. 14."

The so-called "Vote No" Weekend of Action tour then made its way to El Sereno. There Newsom spoke with people who are phone banking for him at the Hecho en Mexico restaurant.

Newsom kicked off his tour Friday in San Francisco, where he took aim at conservative talk show host Larry Elder, who is leading among Republican candidates in the polls. Newsom described Elder as being "to the right" of former President Donald Trump.

Newsom on the attack, says GOP candidate Larry Elder is to the right of Donald Trump
EMBED More News Videos

"That's what's at stake in this election," Newsom said. "Don't think for a second you can't do damage in that role. Think about the judges he'd appoint. Who would he have appointed to replace Kamala Harris in the U.S. Senate? How would that impact the trajectory of the country?"

Newsom supports masks and COVID vaccine mandates, while Elder has said he would suspend such mandates if elected.

Newsom is facing a recall election Sept. 14, after some Californians criticized his handling of the state's homelessness problem, devastating wildfires and COVID-19 crisis. There are two questions on the ballot, asking whether Newsom should be removed from office, and if so, replaced by whom.

On Thursday, Newsom received an expression of support from President Joe Biden, who issued a statement urging Californians to oppose the Sept. 14 recall. Newsom "knows how to get the job done because he's been doing it," Biden said of his fellow Democrat. Biden and Vice President Kamala Harris, the former California senator, are expected to take active roles in the campaign.

Newsom said schedules are still being worked out, but voters should expect both President Biden and Vice President Harris to campaign in California in a "matter of weeks."