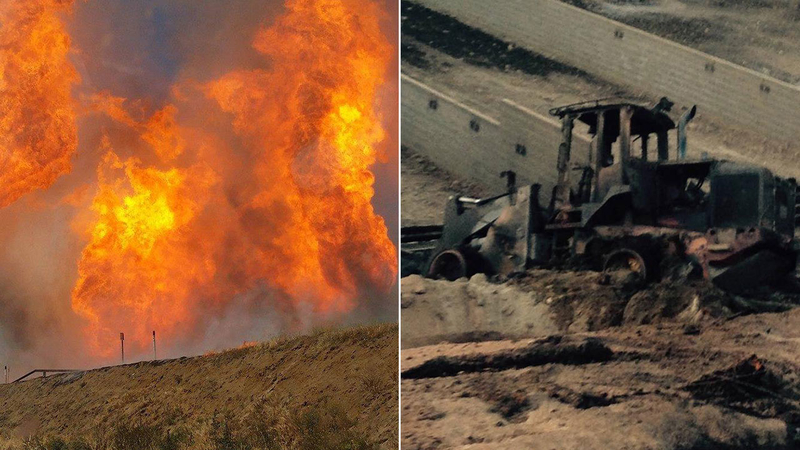 Investigators believe the explosion was sparked when a backhoe somehow struck a 12-inch gas line. "At the time of the explosion, the backhoe was turned over. The whole area is kind of a crater was created," said Fresno Fire Chief Kerri Donis.

Authorities say the backhoe was being used by a Fresno County Public Works employee. When the line blew, it injured 16 people.

The worker suffered critical injuries. The Fresno County Sheriff's Office says 15 other people, including 13 jail inmates who work at the range to mine bullets from the berm and two sheriff's deputies, were also hurt in the explosion. Ten inmates were taken to various hospitals, while three inmates were treated and released back to jail. The two deputies were treated for ringing to the ears and sunburn-type injuries.

Of the 16 injured, Community Regional Medical Center officials say four people are in critical condition, and two others were taken from Madera Community Hospital to CRMC in serious condition. Four other people were transported to Saint Agnes Medical Center for treatment.

Cellphone video captured the flames shooting up more than 150 feet into the sky. The aftermath of the explosion was so loud, Adrianna Vasquez felt the ground vibrate.

"I saw the cloud turning black and then the flame above the trees, and I was like OK I just knew it was a gas fire. It kind of sounded like when the jets fly over; that's exactly what it sounded like," she said.

Deputies asked people in the neighborhood to leave their homes for about two hours while crews pulled water from hydrants to contain the flames.

A PG&E spokesperson says the gas line runs north and south and it's buried -- at least in the spot where the worker may have struck the steel. PG&E detected a slight change in pressure in the pipe at 2:29 p.m. and was then notified about the incident a few minutes after that. Crews shut off gas to the pipeline about an hour later, and because of the remaining gas in the line, flames were put out just before 4 p.m. The utility says this type of incident is not uncommon.

"Unfortunately, we see that fairly regularly where contractors will hit lines for one reason or another, but we're still investigating how it happened this time," said PG&E spokesperson Denny Boyles.

The California Public Utilities Commission brought a team to Fresno to conduct a full investigation of the explosion. Just last week, the commissioners voted to fine PG&E $1.6 billion for the deadly San Bruno gas line explosion.

As fire crews contained the flames on Friday, Union Pacific assessed damage to the nearby train tracks. So far, PG&E says no call was ever made to check for gas lines in the area.

The explosion forced the closure of the northbound and southbound lanes of Highway 99 at Herndon Avenue. Both directions of the highway were back open a few hours later.