Dine and Dish: A taste of Lebanon at Phoenician Garden Grill 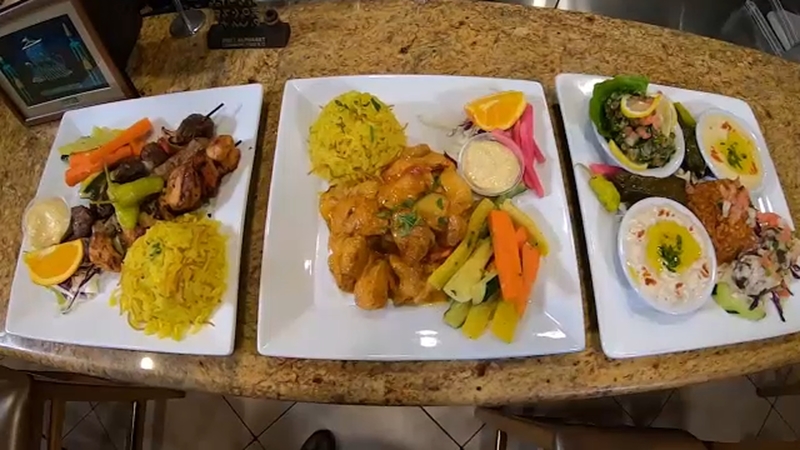 Dine and Dish: A taste of Lebanon at Phoenician Garden Grill

FRESNO, Calif. (KFSN) -- Mediterranean food encompasses everything from Greek and Italian to Armenian and Syrian.

Various veggie dishes like salads have made Mediterranean food a big hit among the health-conscious.

In our Dine and Dish segment, we offered a taste of Lebanon.

Not only do the dishes at Phoenician Garden at First and Herndon in northeast Fresno sizzle, but they're also pretty to look at and tasty to eat.

That has changed in a big way.

Even the Avengers proved to be foodies. In a movie clip, Iron Man asked, "You ever try shawarma? There's a shawarma joint two blocks away. I don't know what it is but I want to try it."

It's seasoned meat in a wrap.

But Tarek explained the spicy chicken is what brought most people to his restaurant.

"One out of three people are going to order the spicy chicken and if it's the first time, I see them the next day most of the time," he said. "They say that was something I've never had."

Curry and cayenne pepper go into the signature dish and take our word for it, the spicy chicken was as good as promised.

Hmaidan added, "The flavors, the smells, it's all really good."

Hmaidan's dad, Mo, now retired, came up with the recipe for the spicy chicken. Tarek's now in charge of the restaurant.

He said, "It's always about keeping him happy. Making sure he sees that we're following his footsteps and proudly."

The hummus, or garbanzo bean dip, was made from scratch.

Hmaidan promised to give customers an authentic dining experience.

"We bring all our spices from Lebanon so they're very unique, from a family that owns a factory back there," he said.

Different regions offer their own variations on Mediterranean cuisine.

Hmaidan was 14 when the family came up with the restaurant name.

He explained, "Phoenician is a little bit of everything in the area back 2,000 years ago."

Tarek said his dad told him to pay close attention to the customers.