Central Valley shoppers line up for Thanksgiving Day deals at Best Buy, Target, and beyond 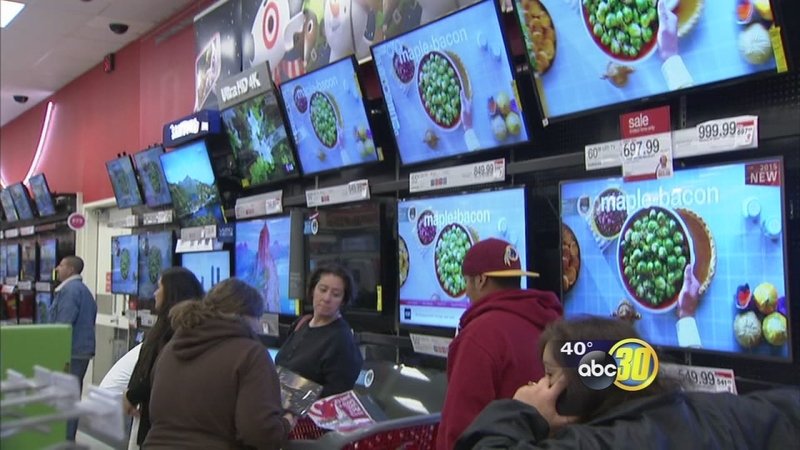 Central Valley shoppers line up for Thanksgiving Day deals at Best Buy, Target, and beyond

FRESNO, Calif. (KFSN) -- Walk right in, and step right up, because the best deals of the season have officially started.

Folks plucked TV's off of store shelves so fast that Selma's Mark Villanueva didn't get the deal he hoped he would.

"I don't think you could probably get this one online either, for cheaper," Villanueva said. "Maybe, but I don't think so."

Well you can, if you're fast enough. By now it's becoming more common to see the same great deals online you see in the store.

"For some people it's enjoyable to come out and shop, and brave the elements and see all the different stores, and lines," Watkins said.

"You can get some of the same deals online," said Angel Aguirre, of Fresno. "Me personally, I prefer to be out here, and doing it myself versus being on a computer and hoping stuff arrives on time."

Aguirre was first in line at Target, waiting since 7 p.m. Wednesday night.
Further down the line, Firebaugh resident Luz Cruz had come straight from the hospital with her mom.

"My sister had a baby today too so that's why we came over here Fresno, and we just decided to stay in the line for the television," Cruz said.

It takes all kinds of Thanksgiving Day and Black Friday shoppers, looking for every kind of deal. And for those who prefer cart traffic to web traffic, make no mistake, it's their choice-and they couldn't be more proud.

"I'm still out here, cause it's fun, we do it every year," said Fresno's Virginia Mehl.