'We're not giving up on this season,' Tedford says as Dogs get ready to take on UNLV 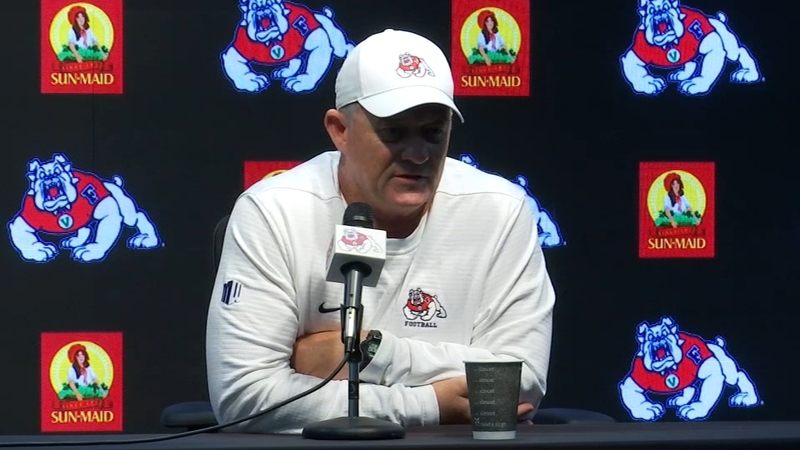 'We're not giving up on this season,' Tedford says as Dogs get ready to take on UNLV

FRESNO, Calif. (KFSN) -- Fresno State returns to Bulldog Stadium for the first time since September 21st. The Dogs have a short week to prepare for UNLV who's coming off their first-ever road win against an SEC opponent in Vanderbilt. They defeated them 34-10 on Saturday.

Coach Tedford says the team took accountability after their loss to Air Force and ready to get to work this week.

"Now you know, we don't play another option team but different teams pose different problems and challenges. UNLV is no different, so we're going to have to play against their scheme and win at the line of scrimmage," the head coach said in a press conference on Monday.

Tedford says the Rebels have a big physical offensive line and they lead with the run game. Bullard's Charles Williams takes on most of the load for UNLV rushing for 71 yards on 24 carries and a touchdown against Vandy.

"They have two good running backs, he's one of them. He's a 190 pound back who's elusive he's physical. He has the speed to get to the edge," he said.

UNLV's Linebacker Jevin White was named the Mountain West Defensive Player of the week today. He helped force two turnovers on Saturday as the Rebels allowed the fewest points scored by an opponent in four years.

"We have our hands full there's no doubt about it, it was a great win for them I'm sure they'll come here with a lot of confidence. Last time they were here they beat us," Tedford said.

Fresno State will be playing its first-ever Friday night home game in the Tedford era.

"Saturdays are pretty focused, there's not a lot going on as we're preparing so Friday will be a little different. We're going to do our best to stay focused with what we have to do. I hope everyone comes out and gives us the extra boost for the home-field advantage that always helps us," Tedford said.

Tedford had a message for the Red Wave, he said: "don't give up on this team because we're not giving up on this season."