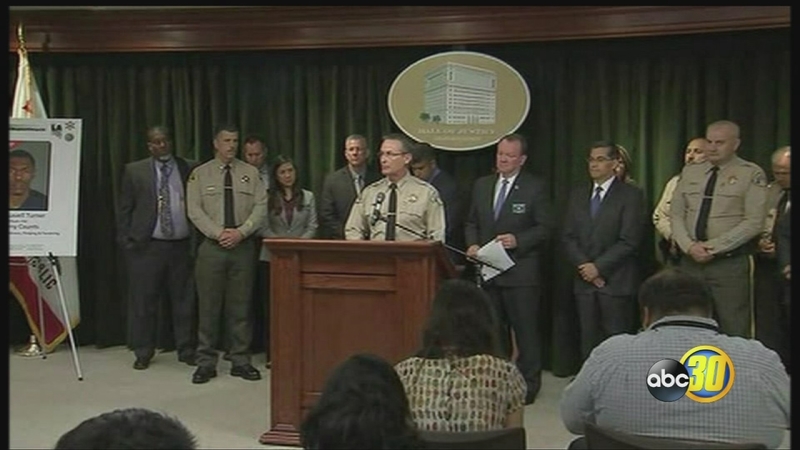 TULARE COUNTY (KFSN) -- When it comes to children and sex trafficking Tulare County Sheriff Mike Boudreaux gets furious. Seven months ago investigators found a missing Tulare County girl he said was being forced to have sex for money in Los Angeles.

"The predators are very manipulative and they are very good at what they do."

She was not the only one who was lured into prostitution through the internet. In this case more than a dozen victims were identified and Boudreaux believes there will be more.

Quinton Brown and Gerald Turner of Fresno are now in the Tulare County Jail facing dozens of felony charges.

They still have not arrested Mia McNeil who is also accused of identity theft.

"We believe McNeil would rent apartments that housed the traffickers and provided a location where customers would pay to have sex with these victims," said Sheriff Jim McDonnell, Los Angeles County.

McNeil is also accused of leasing high end cars like Maserati's. Investigators said she used stolen credit information to lease the cars so the traffickers could move the victims throughout the state.

Sheriff Boudreaux said the investigation is ongoing but he did reveal traffickers spend months looking for and grooming local children online.

"A predator can hide in that grouping of friends and learn about what you do on a daily basis and learn who your friends are. Once they had one or two or a few more hooked within this they learned who their friends were, who would be vulnerable, and began to use them to entice others to come in to the same environment."

It is a hard and evolving battle as they search for predators behind a computer screen. Boudreaux is warning local parents it could happen to their child.

"Don't be that parent who didn't take advantage of the time of being a parent to sit down with your child and ask those difficult questions."

Boudreaux said at least one of the victims is now back home with her parents. He also said she has been through rehab and counseling and is on the road to recovery.
Report a correction or typo
Related topics:
tulare countylos angeleshuman traffickinglos angelestulare countymissing person
Copyright © 2022 KFSN-TV. All Rights Reserved.
TULARE COUNTY
SPONSORED: Slick Rock Student Film Festival accepting entries
1 killed in crash near Ivanhoe
5 arrested in connection to Tulare Co. crime spree that turned deadly
2 men killed after car hits power pole in Tulare County
TOP STORIES
Man charged with murder of 2-year-old whose father died a year earlier
How reliable are rapid tests? Dr. explains when to depend on results
Is there home appraisal bias in Fresno? Professionals weigh in
Housing Watch: Million-dollar homes at Ventana Hills in Fresno County
Valley Children's Hospital delaying some non-urgent surgeries
Good Sports: Fresno woman gains recognition with indoor rowing
Valley ag business continues to feel impact of supply chain issues
Show More
Family of 5 displaced after house fire in southwest Fresno
Merced police searching for missing 87-year-old man
Website for free COVID tests is here. How does it work?
Biden, 1 year in, says nation weary from COVID but in a better place
Man suffered severe burns after explosion at Table Mountain Casino
More TOP STORIES News