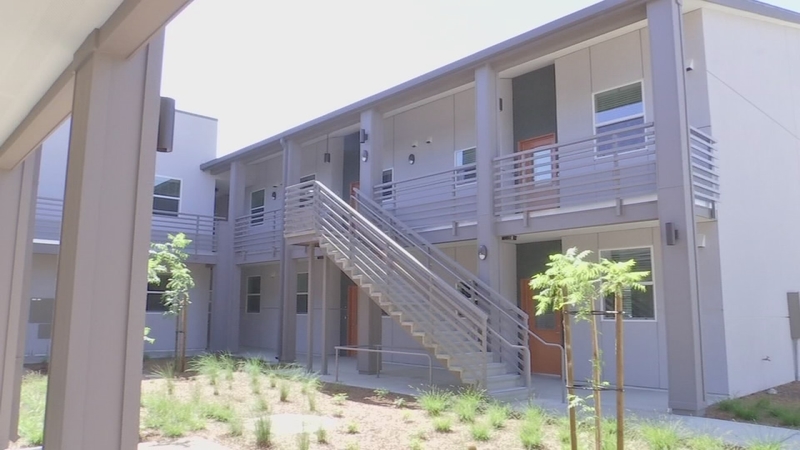 FRESNO, Calif. (KFSN) -- Marla Danny is about to move into a new apartment. She's a U.S Navy Veteran, a mechanic who served at Naval Air Station Lemoore. But when her husband, also a Navy veteran, passed away she says her life fell apart.

Sober now, Marla will be among the first residents of the Renaissance at Parc Grove. A housing project giving a home, to homeless veterans. The complex is across the street from the Fresno VA Hospital.

At the official ribbon cutting ceremony, Congressman Jim Costa (D-Fresno) outlined the statewide problem, "Veterans organizations estimate that in California alone every night we have between 16 to 18 thousand individuals who are veterans who are homeless."

In Fresno, there are an estimated 150 veterans among the 2,000 homeless people.

But Fresno Housing Authority Director Preston Prince says the problem is getting better. "In the last 7 or 8 years we have been really fortunate to reduce homelessness in Fresno by 60%, so we've gone from around 5,000 homeless individuals to around 2,000 individuals."

During the ceremony, Fresno Mayor Lee Brand and Fresno County Board of Supervisors Chairman Sal Quintero said they would soon be announcing a joint city-county initiative to deal with homeless. Prince is optimistic the joint effort, combined with help from non-profits and the business community will help.

"I really have confidence we will be able to make another large reduction in homelessness," said Prince.

Marla is grateful to be getting help because she's a veteran but says everybody on the street needs a hand.