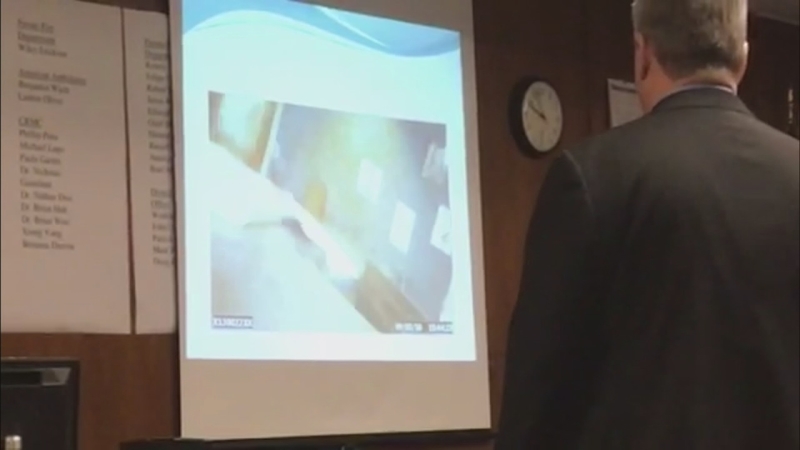 FRESNO, Calif. (KFSN) -- For the first time, we're hearing a firsthand account and seeing the video of the shooting at the Fresno County jail that severely injured two correctional officers in 2016.

The trial started Wednesday against the shooter, Thong Vang.

Video from the jail lobby shows Officer Juanita Davila confronting Vang and trying to get him to follow the rules. They walk out of frame on the right-hand side of the screen, but you can still hear the exchange leading up to the gunfire.

Right after her response, chaos erupted when Vang opened fire, and Davila knew right away a bullet had hit her.

Dramatic video was presented in court Wednesday showing the moment a man opened fire at the Fresno County Jail.

"I was aware that I was shot in the neck," she said. "Like I said, I was losing my hearing and I felt warm blood coming from my neck."

As she struggled to get her bearings, she told someone peeking out of a bathroom to stay hidden, then noticed Officer Malama Scanlan on the ground about 20 feet away.

"He was face down and blood was coming from his mouth," she said

The footage is being shown at Thong Vang's trial. The video was taken from injured officer Malama Scanlan's taser camera which shows the moment Vang shot Scanlan.

Prosecutor Bill Lacy lays out the simple facts: The defendant shot two correctional officers. He hit Juanita Davila in the face. He shot Scanlan twice — in the arm and the head. He says Scanlan suffered devastating consequences.

Lacy says Vang goes into jail lobby. He told an officer he’s there to visit someone. He paces around. He walks back to a metal detector. An officer tells him to move. Vang refuses, says take me to jail.
Davila is first officer to respond to call for assistance.

Davila tells Vang to leave. He keeps saying he’d rather go to jail. She grabs his elbow to escort him out. He won’t go. More officers start to arrive, including Scanlan. As they arrive, Vang pulls a gun and shoots through a glass door. People scatter.

COs don’t have guns. An officer pulls his taser and tries to shoot him. He hears gunshots and Davila is down. Vang pushed her back, pointed the gun at her face, and shot her. He also shot at another officer, but missed.

A lieutenant comes in. He has a gun, fires 5 shots at Vang. They all miss. Vang moves into a hallway and a standoff ensues. Vang eventually surrenders, gives up his gun.

"Toamalama Scanlan suffered devastating injuries as a result of being shot," said prosecutor William Lacy. "He hasn't spoken. He hasn't walked. He hasn't eaten on his own since this incident."

Action News visited Scanlan in a Houston rehab center last year and saw just how slowly his recovery has progressed.

He had tried to use pepper spray on Vang, then a taser, which recorded video of the moment Vang shot him. He got hit twice in the head and the arm.

Defense attorney Esquivel says he’ll show evidence Vang’s use of meth caused paranoia. He tells jury it’s up to them to decide whether his mental status allowed him to form the intent to commit these crimes.

Vang is an undocumented immigrant with a felony history, but because he's Hmong, he has no native country to which he could be deported. Neither Thailand nor Laos would take him.

His defense attorney is arguing Vang couldn't form the intent to commit attempted murder because of another piece of his history.

If he is convicted on all the charges, Vang faces 102 years to life in prison.

The trial is expected to last up to six weeks.