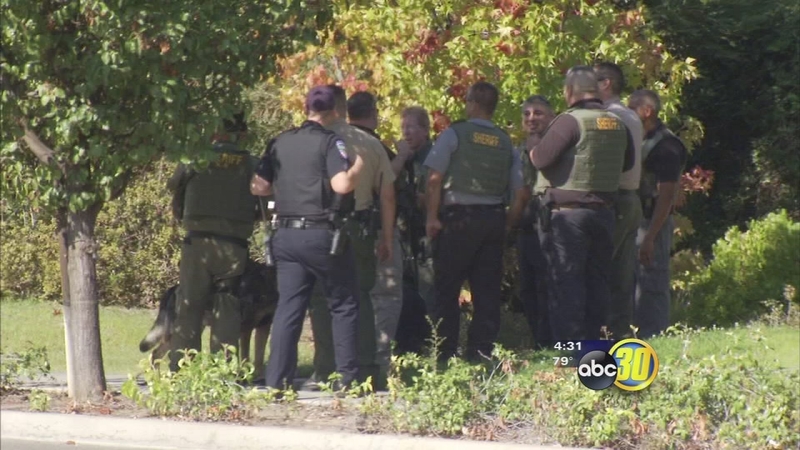 CLOVIS, Calif. (KFSN) -- Two armed men are on the run after Clovis Police say they broke into a home and robbed an elderly couple. It happened Wednesday morning near Willow and Alluvial.

There were officers on every corner with a helicopter in the sky but only one person was able to confront the thieves - a woman named Marilyn Williams, "I heard my husband and he was like, 'get the gun, get the gun...shoot him, shoot him,'" Williams said.

She was defending her home with a rifle and the men, she says were in her backyard, "I got up and went right out to them and they took off."

Before this confrontation started, police say the thieves smashed a window to get into a home down the street and held an elderly couple at gunpoint.

"The assailants were armed with handguns and were wearing hoodies, masks and bandanas," said Janet Stoll-Lee who is with the Clovis Police Department, "fortunately no one was hurt."

She says the men took off with jewelry and a gun from the couple's home.

Williams says they ran through the neighborhood, jumped some fences and landed in her backyard. That's when she pulled out a rifle and she says they dropped a pillow case full of jewelry.

"Everybody is ok but they wouldn't have been had I got to my gun soon enough," Williams said.

Investigators recovered the stolen gun and jewelry but they need help finding the two home invasion suspects. If you have any information, you should call Clovis Police.

PD says the thieves got away but they dropped the stolen firearm and jewelry. @ABC30 pic.twitter.com/bR62Jukozg

Clovis PD says 2 men broke into a home and robbed an elderly couple. They took a firearm and jewelry. @ABC30 pic.twitter.com/pIhyY8TRoS

Clovis PD is calling off the search for the home invasion suspects. No one is in custody. @ABC30 pic.twitter.com/dnPE1X14ZV

Officers are on every corner in the neighborhood. 1 helicopter is in the sky & Mt View school is on lockdown. @ABC30 pic.twitter.com/zR5NHJqW9J

This woman says she confronted the men in her backyard and she scared them off with a rifle. @ABC30 pic.twitter.com/aHItqmqk0H

Witnesses say there were 2 men running through the neighborhood with stolen jewelry. @ABC30 pic.twitter.com/oEVFbpG9JX