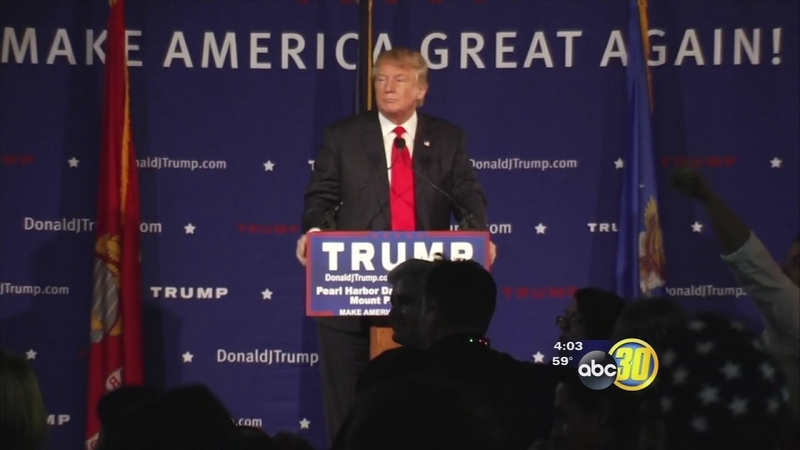 FRESNO, Calif. (KFSN) -- A Survey USA Poll, done exclusively for Action News has some disturbing results for Fresno's Muslim community. When we showed the poll to Sayed Ali Ghazvini, the Imam for the Islamic Cultural Center he said, "This is shocking news."

He was shocked and saddened by the fact so many local people seem to agree with Donald Trump's call to ban Muslim immigrants from this country. "Many Muslim Americans are immigrants, they actually escaped persecutions escaped tyranny escaped dictatorship, escaped war and violence to come here but when they hear Mr. Trump statements, it reminds them of what they heard from dictators and tyrants."

Ghazvini said members of the local Muslim community are seeing their children bullied in school and are becoming fearful for the safety of their families. "People really don't know what kind of pressure and stress our community is going through its very sad and stressful moment for us. "

The Survey USA Poll shows 59-percent of those surveyed either strongly agree or somewhat agree with Trumps call for a total and complete shutdown of Muslims entering the country. Local conservative activist Tal Cloud, of the Republican Party's Lincoln Club, said he doesn't support Trumps view but understands why many do. "He's bringing up issues that other politicians aren't doing and that's why he's so popular right now."

The survey also shows 73-percent feel Muslims need to do more to denounce violence. Cloud agrees, "I think the Muslim community needs to be doing a much better job showing their support for the United States than they've done to this point."

The Imam says Muslims have repeatedly denounced terrorism and ISIS. "What we are saying is ISIS is against our faith, why, because most victims of ISIS are Muslims, they started with killing Muslims before they killed anyone else. We are proud of being American and Muslims, we talk about it, and we educate ourselves and others, yet when we see such kind of and hear such kind of rhetoric it hurts us a lot," said Ali Ghazvini.
Related topics:
politicsfresnodonald trumpmuslimsfresno
Copyright © 2021 KFSN-TV. All Rights Reserved.
FRESNO