Parolee arrested after series of crashes in Northwest Fresno

KFSN
FRESNO, Calif. (KFSN) -- A parolee is back in custody after leaving a trail of destruction across Northwest Fresno. It started just before 11 Thursday night when police received a call of a crash at Santa Ana and Blackstone.

Officers said a family of five in a trailblazer was rear-ended by a black Mercedes. Shortly after, the Mercedes crashed into a vacant home at Rialto and Glenn. Then police spotted the car as it headed West on Ashlan. Moments later, the Mercedes slammed into three parked cars.

The driver, 22-year-old Anthony Padilla was taken into custody. Police said he is a parolee who was found with a gun under the driver's seat.

Sgt. Rudy Tafoya, Fresno Police, said, "He was secured and currently we're evaluating him to determine of whether or not he was under the influence of drugs or alcohol."

Two others were detained.

No one was hurt in any of the crashes.

Police did say a 10-year-old was checked out by a paramedic, and was determined to be okay.
Report a correction or typo
Related topics:
fresno northwestparolecar crashduifresno
Copyright © 2020 KFSN-TV. All Rights Reserved.
FRESNO

McClatchy Co., owner of the Fresno Bee, files for bankruptcy

Portion of Blackstone Avenue closed off after fatal crash 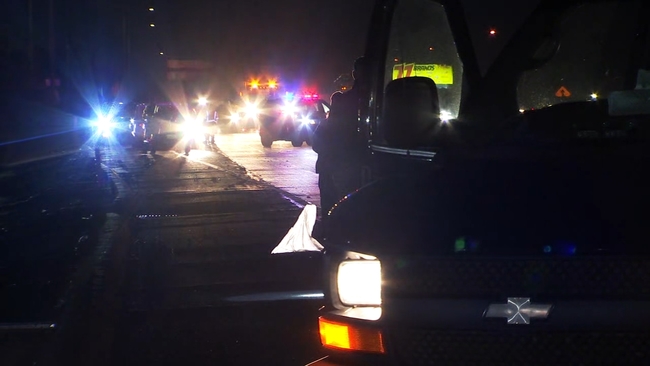