ABC30's Accuweather team has been tracking the storm for days, here's what you need to know:
KFSN
By Madeline Evans, Shayla Girardin and ABC30.com staff 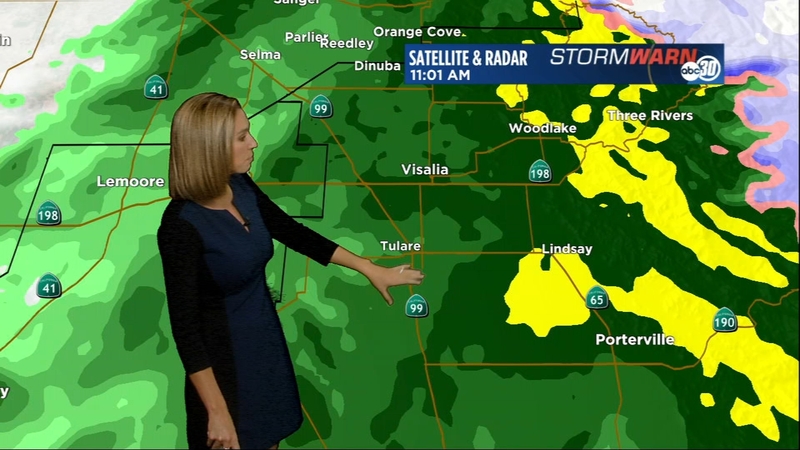 FRESNO, Calif. (KFSN) -- Central California woke up to strong winds and rainfall on Monday morning as an atmospheric river moves over the region.

ABC30"s Accuweather team has been tracking the storm for days, and now it's finally reached the Central Valley. Here's everything you need to know about the powerful storm:

When will the Central Valley see rain?

Heavy rainfall moved slowly over the North Valley early Monday morning. The rain will push toward the south throughout the rest of the morning and into the afternoon.

A Flash Flood Warning is in effect for the entire Central Valley, with urban and small stream flooding and ponding possible on the roads.

ABC30 Meteorologist Madeline Evans says the strong rainfall is a concern for quick flooding, mudslides and debris flow for for the burn scar areas. A Flash Flood Warning was also in effect for the foothills. The warning is in effect until 11 pm on Monday.

Powerful wind gusts of approximately 20 mph will continue throughout the day. Temperatures for the Valley start in the upper 50s but will drop throughout the afternoon.

(Note: ABC30's Accuweather team will continue to track the storm and will provide updates throughout the rest of the week. Watch the video player above for the latest updates).

What is an atmospheric river?

According to the National Oceanic and Atmospheric Administration (NOAA), an atmospheric river is "a flowing column of condensed water vapor" that moves through the atmosphere and cools, producing heavy amounts of rain and snow. The NOAA says powerful atmospheric rivers could cause flooding and even mudslides.

How much rain will we get?

Rain totals for the Central Valley are expected to be about half an inch to an inch for the South Valley and one to two inches for the North Valley. The foothill communities will see the most with about three to six inches of rainfall expected.

In addition to rain, strong gusty winds are possible for the western parts of the Central Valley on Sunday afternoon and early Monday, NWS Hanford said.

How much snowfall will there be in the Sierra?

In the Sierra Nevada, at elevations around 8,000 to 9,000 feet will see the most snow. Mammoth could see about 52 inches of snowfall, Yosemite National Park could see 32 inches and about 19 inches for Sequoia National Park.

A Winter Storm Watch will be in effect for elevations above 8,000 feet from Sunday at 11 am to Monday at 11 pm.

Preparing for the storm

Public works teams across the Central Valley have been preparing for the upcoming storm.

Fresno County officials worry homes and residents along the Creek Fire burn scar could be in the path of mudslides. Evacuations warnings are in place at Big Creek Canyon from below Big Creek to the San Joaquin River. You can track which neighborhoods are at high risk for mudslides and flash flooding through this interactive map.

Madeline Evans says Monday morning may be a messy commute for drivers due to the rain. Officials were urging drivers to take caution and allow plenty of time for travel. Click here for the latest road closures and chain controls in Central California.