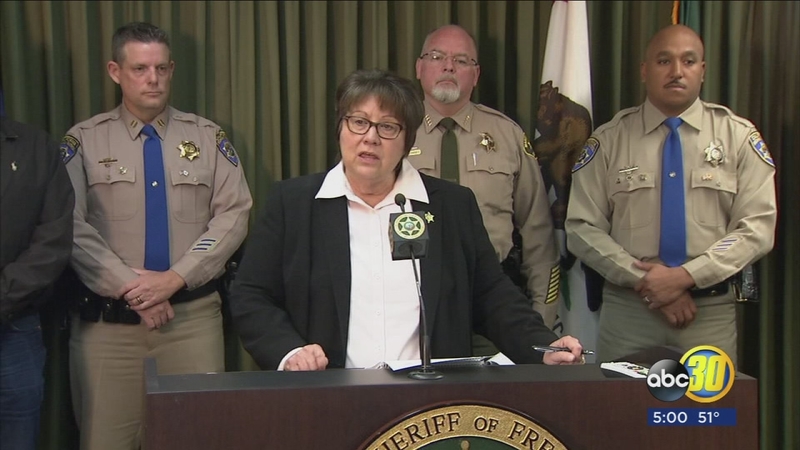 FRESNO COUNTY (KFSN) -- A bird's eye view from the sheriff's helicopter eagle one shows the stretch of County Road on trinity near Shaw Avenue, where the shooter struck again on Sunday night.

"We have not determined what a motive is or could be for these shootings- they all appear to be completely random," Fresno County Sheriff Margaret Mims.

Deputies have stepped up patrols in the area outside of Kerman where a majority of the shootings have been happening. Ten separate cars have been hit, from November 27th until now. Two were in Madera County, the rest in rural Fresno County.

"A common thread in all of the reports is that the victims said they heard loud bangs, as another vehicle passed them going the opposite direction in the roadway. They later inspect their vehicle and find bullet holes in various places."

So far, the victims of these random shootings have given similar descriptions of the suspect's vehicle, which is described as a dark-colored pickup with extended or crew cab and lifted or oversized tires. The victims each said that they heard a loud bang as the vehicle drives past them coming from the opposite direction that they are driving.

Two victims from last week said they were shocked and afraid when their trucks were suddenly shot while they were driving. One man was on his way home from work- the other heading to work when the shooter attacked.

The shootings have mostly occurred during traditional morning and afternoon commute times. Mondays and Fridays have also been days where many of the crimes are happening. A majority of the shootings are also during a two-hour window.

Only one person was injured by the gunfire. That driver was hit by shrapnel in the chest and is expected to recover.

Detectives said they have not found a motive yet in the random shootings.