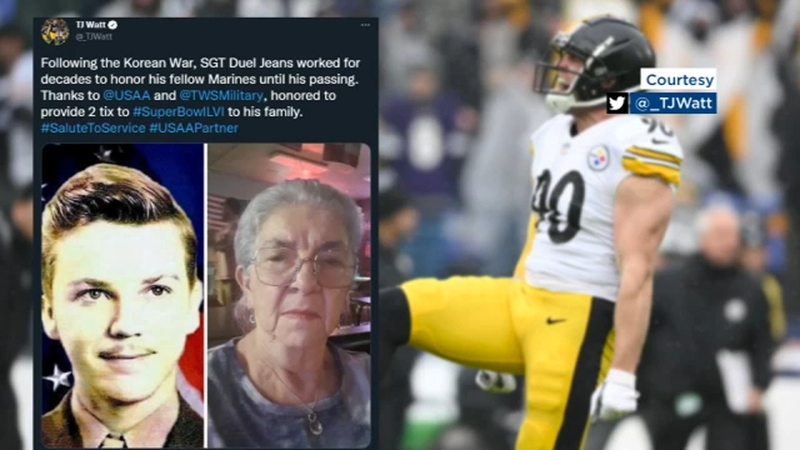 Considered one of the most feared pass rushers in the NFL, the Steelers Outside Linebacker and arguably best defensive player in the league recently tweeted that he would be giving two tickets to the family of Marine Corps veteran Duel Jeans, who died in 2013.

Jeans is survived by his wife, Pamela and their children.

"I was totally shocked because I'm just a little old grandma in Fresno just floating through my day, trying to stay out of trouble. But it's hard for me because I tend to be too active," Pamela Jeans said.

Jeans joined the Marines in 1947 and was discharged in 1951 and worked as an automotive mechanic, earning the rank of Sergeant while serving in China and Korea during the Korean War.

Following his years of service, Jeans and Pamela worked with Together We Served to make over 15,000 military hero remembrance profiles on the group's website.

"The project started out it was only going to be Korean War veterans, but it has evolved. Now it's any Marine, any war or peacetime just so long as their name is not forgotten."

Watt has recently teamed up with Together We Served and USAA to award the tickets to Pamela for all the years of hard work honoring veterans.

Pamela, who is a Steelers fan and lives in Fresno, has chosen to take her son to the big game.

"Of course, I know that TJ Watt is a big Steeler person. Physically as well, so I just hope I don't fall down when he says my name or talks to me in any sort of way."

TJ Watt will meet with Pamela and her son, Kelly the Friday before the Super Bowl during a special dinner to present them with the tickets.

Pamela calls it the trip of a lifetime and knows her late husband will be by her side every step of the way.