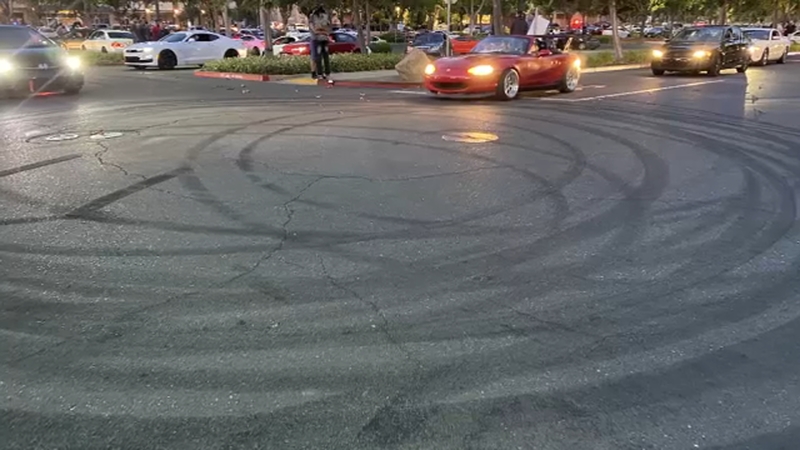 Fresno residents urging police to crack down on sideshows in city

FRESNO, Calif. (KFSN) -- The sound of screeching tires filled the air as traffic ground to a halt at the corner of Clovis and Kings Canyon Road for a sideshow in southeast Fresno. The crowd might be having fun, but the danger is real.

"All it takes is for one of them to spin out of control and hit someone and that person is done."

Cindy Alvarez got caught in that commotion back on October 10. She captured images of multiple cars and dozens of spectators in the intersection.

"If you choose to go out and do it out of sight, then that's on you," she said. "They are bluntly doing it in front of everyone."

She sent it all to Fresno Police and says she was disappointed not to see the department urgently pursue charges.

"How many people are going to have to die before they get to the bottom of this," asked Alvarez.

Action News spoke to Fresno PD officials who admit, most of the traffic division has been occupied with the Big Fresno Fair, but will now be shifting back to handling street sideshows like this one.

Authorities say videos like one captured from a similar sideshow at Polk and Dakota in West Central Fresno, are important to helping them track down drivers and impound their cars.

"Yes, it may not happen immediately but our detectives look into that," said Councilmember Mike Karbassi. "They look into the video footage."

Drivers can face criminal charges and thousands in fines days or weeks after the offense.

"When your car is impounded, it's an automatic 30-day impound," said Karbassi. "You are paying for every day that car is under our care at the city and we are going to charge you a heck of a lot. Your insurance is going to go up. You are going to have to go to court and deal with all that trouble. It's not worth it."

Karbassi hears complaints of the citywide issue up in his northwest district, too.

He says the city will continue to crackdown through multi-agency operations.

During a single night back in February, 85 officers from four agencies handed out 189 citations, impounded 44 vehicles and made 10 DUI arrests.

In Sacramento, Governor Gavin Newsom signed a bill into law this month authored by Bakersfield Assemblyman Vince Fong, allowing courts to suspend licenses for up to six months for those who take part in illegal sideshows.

"The tragedies that have surrounded sideshows and street takeovers are 100% preventable," said Fong.

The legislation doesn't go into effect until 2025.