20 million mosquitoes being released in Fresno to fight disease 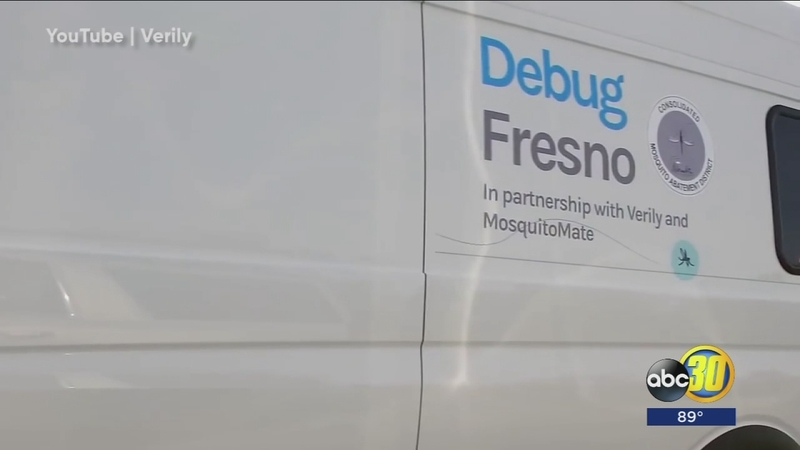 FRESNO, Calif. (KFSN) -- Using mosquitoes to fight mosquitoes sounds like a counterintuitive idea, but experts say it's part of a new strategy to kill a new invasive species here in Fresno.

The mosquito releases started Friday and will continue for the next 20 weeks. By the end of it all, 20 million male mosquitoes will be injected into this neighborhood.

Every week for the next four months, Steve Mulligan will be collecting traps in yards across Fresno County measuring how well a massive bug campaign is advancing.

"So using this, we can tell if there is a reduction in the population," the Consolidated Mosquito Abatement District worker said.

Mulligan is partnering with a company called Verily to release bacteria-infected male mosquitoes. The bacteria makes the males infertile, and the idea is that they will mate with the local population of wild females.

"The result of that mating is infertile eggs, the eggs will not hatch they will not produce offspring," he explained.

The mosquito they're targeting is the Aedes Aegypti - an invasive species hard to control and a carrier of deadly diseases including Zika.

"They utilize these small sources of water that people have around their homes and residences," Mulligan said.

Families say they've noticed these bugs attack in the day as well as night and are particularly aggressive. They say any new tactic helps.

"I feel a lot more mosquito bites and tingling on my legs, and I know when I look down that's usually a mosquito swarming," resident Monica Teran said.

The sterile male mosquitoes being released don't bite, and over time, Mulligan hopes they will cut down the population.

"If we are successful, the number of eggs that hatch will be less and less," he said.