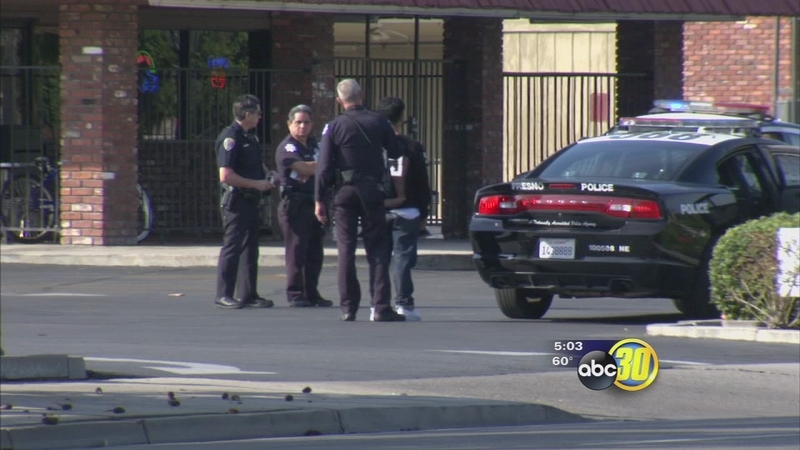 FRESNO, Calif. (KFSN) -- Police are working to ensure the safety of Valley children after two high school students were robbed at gunpoint near Hoover High in northeast Fresno. The crimes put three schools on lockdown.

Fresno police took down the gunman in two armed robberies near Hoover High School. Police say the victims were two students who were walking to school early this morning. The robberies happened roughly an hour apart, one at 6:18 a.m. and the other at 7:32 a.m. In both cases the suspects pointed a gun at the victims. Officers say the second victim was a 15-year old girl. "She was going to school with her backpack and they were in front of her. And they stop they were lingering for her to pass, she didn't want to pass but she did, they pull out the gun-- this kid in the bulldog sweatshirt pulls out the gun. They rob her, take her backpack, and cell phone," said Lt. Joe Gomez, Fresno Police Department.

Lt. Gomez says afterwards the suspects, which included a Hoover High student and another teen, fired the gun several times. "These kids are unsophisticated, kind of like a joy crimes-- out just committing the crimes. I mean who does robberies of people you go to school with and then stay in the area, generally, where you committed the robberies."

Not long after the crimes the suspects were spotted by a patrol officer right across from Hoover High. Hoover and two nearby elementary schools were placed on lockdown while investigators set up a perimeter. The teens were arrested minutes later. "We're pleased with the outcome, very saddened by the activity, but extremely relieved that no one has been hurt," said Michael Hanson, Fresno Unified Superintendent.

Hanson says the suspect from Hoover will likely be removed from the campus indefinitely.

Counselors were also on hand for the students who were victims today. "For a student to walk to school and be held up at gunpoint is nothing short of a traumatic event," said Hanson.

The suspects are facing charges for armed robbery.