Aggressive day-biting mosquito on the move 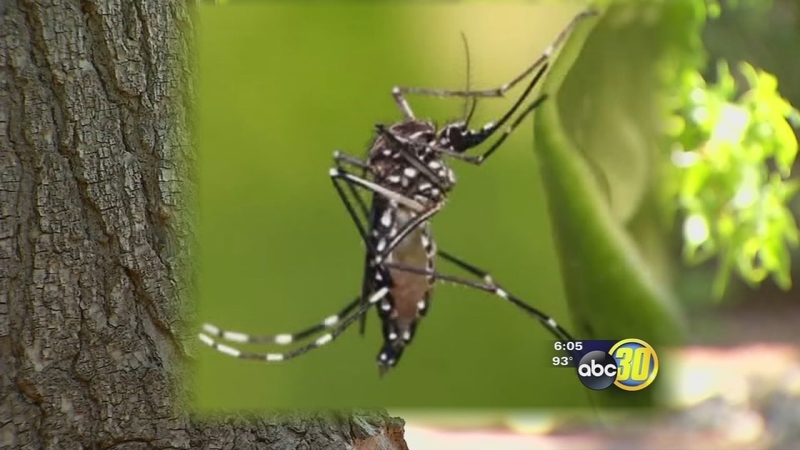 Aggressive day-biting mosquito on the move

FRESNO, Calif. (KFSN) -- A mosquito which can carry yellow fever has abatement officials worried. The mosquito has been now found in three Fresno neighborhoods: Herndon and Polk, Shaw and West and most recently Lansing and Maroa.

The black and white striped mosquito - aedes aegypti - is aggressive even during the day. Biologist Chenoa DeFreece was setting new traps in the Lansing and Maroa area, site of the latest find. DeFreece said, "Looking at the size of that mosquito and the abdomen, the stomach it looked pretty full of eggs."

Abatement officials were very concerned because the mosquito can carry yellow fever, dengue and chikungunya. The mosquito was previously established in Clovis and Madera but was recently found in a trap in a Northwest Fresno neighborhood near Saroyan Elementary.

Fresno Mosquito & Vector Control District assistant manager Gary Byde was frustrated by its movement. Byde said, "When you hop in the car in the morning to go to work with the windows down it's going to be in your car. That's how we think this mosquito is getting around."

It is an aggressive daytime biter so you need to use repellent, repair your screens and keep your doors closed. Byde said, "Usually when we have a mosquito population we can find a source within a week or two and knock it down. This one is popping up throughout the area like a wildfire."

The mosquito likes to breed in small containers so it's important to empty every little cup or plate to control the spread. Byde explained, "If not, once this mosquito establishes itself in your backyard it's very hard to control."

Contact your local mosquito control district if you have a problem.