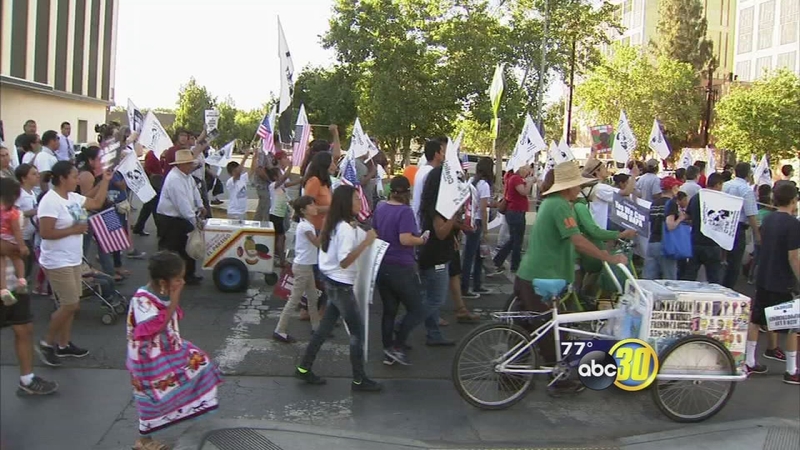 FRESNO, Calif. (KFSN) -- Fresno's May First March included a lot of movement, and a lot of noise. But organizers say there was only one voice, and this was an opportunity to let it be heard.

"Help us," said Leonel Flores, the coordinator for May First Coalition for Immigrant's Rights Fresno. "Help us to stop deportation, help us to stop separation of families, help us to pass immigration reform."

The call for comprehensive immigration reform is nothing new, but May First marchers said the immediate focus now is to protect and expand the president's DACA and DAPA programs, relief for children of immigrants and parents of citizens, but currently being blocked by a federal court order.

Valencia moved to Fresno from Mexico when she was 4. She says it's time to bring a broader awareness to immigration issues here in the Central Valley.

At 6 p.m., hundreds marched the streets of Downtown Fresno, chanting in Spanish and English.

"We're also demanding the Not One More campaign, where (it's) basically saying not one more deportation, not one more family torn apart, and that's why we're here," said May Day marcher Brisa Cruz.

The event also included voter registration, and information on how to obtain driver's licenses or become a citizen.

One group did display a "Fresno stands with Baltimore" sign.