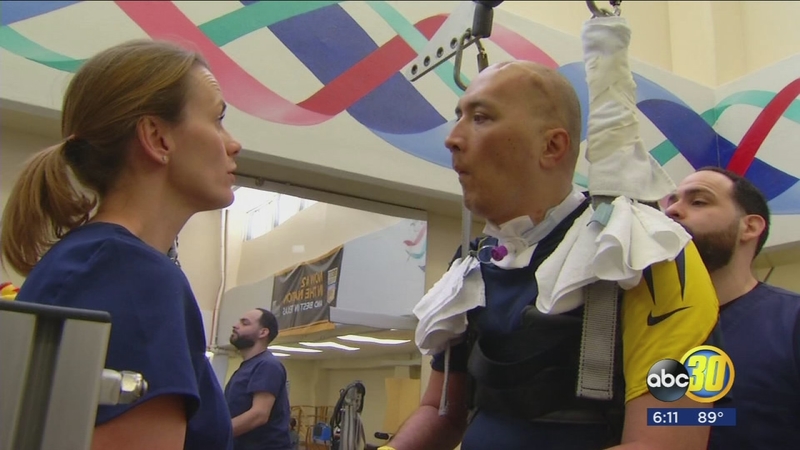 It's a two-step at the biggest medical center in the entire world, and one of the top two rehabilitation facilities in the country - Houston's TIRR Memorial Hermann.

Scanlan's long walk to restoration is moving forward against all odds. For more than six months, doctors in Fresno and San Francisco thought the Fresno County correctional officer shot in the jail lobby last September would never regain consciousness.

His family felt he had a lot more fight in him.

"You know, every time we discussed his next step in recovery, it was always long-term care, long-term this, that's all we kept hearing," his daughter Paulene said. "But my mom said 'No. My husband deserves the best, and that's exactly what he's going to get.' and here we are."

The family got him transferred to Houston in March to the Disorders of Consciousness Program. And at first, even these specialists believed he was in a vegetative state.

It only took him three or four days to change their minds.

From there, Scanlan progressed incrementally but noticeably. He can answer "yes" or "no" questions with small head movements.

He has a tiny bit of control in his limbs, especially his right arm, and he uses his tongue to communicate pain when his therapists are pushing him a little too hard.

Step by step, Officer Scanlan is walking his way towards a recovery. In this case, he's got treadmill work that helps both the body and the mind.

Paulene loves to see her dad on the treadmill, standing with the help of a harness and moving his legs as part of his physical therapy.

Occupational therapy includes motion challenges, even using a skateboard like he once rode to get to work. And in music therapy, he works the strings of a guitar or a more fitting instrument for the big Samoan.

And even though he clearly gets tired during three-hour therapy blocks, he flashes a sense of humor, like when his speech therapist refers to the little instrument as a ukulele instead of the Samoan ukulele.

"Was I totally butchering the pronunciation?" a speech therapist asked a nodding Scanlan.

Kothari is impressed with how far Scanlan has come in three months but says the brain is still extensively injured. The physical activity is a back door to the brain, and it's helping but his level of consciousness fluctuates, and Kothari says he can't see very far into Scanlan's future.

"You know, it's like a football game or a basketball game. It's harder to predict the outcome in the first quarter of the game than it is in the fourth quarter," Kothari explained.

In this first quarter, the doctor plans to try new neurostimulants and even ambien to get Scanlan's brain online more frequently. He's pushing for a little more motor control and strength so Scanlan can start using assistive technology for an even better quality of life.

And he says having family members here is a big reason to believe Scanlan can get even better. Paulene, 19, stays with him pretty much 24 hours a day and his wife and other family members cycle through.

She's holding out hope his recovery mirrors that of Arizona congresswoman Gabby Giffords, who learned to walk and talk again at the same Houston hospital.

"I know that he knows being here, he's getting better," Paulene exclaimed. "And I think that as long as he knows he's working towards getting better, he's happy because he wants to come back."

And for the first time, everyone can see Malama Scanlan is on the right road to make that comeback.